2015 has been a year of colour under the flyover -so much of the work HCCA has done to secure funding and permissions finally came to fruition.

In March we began testing colours for the pillars, preparing a ‘canvas’ for a mural by Dave Bain. We had been keen to explore a tonal range and and Anna had been playing with ideas for a long while. When Dave refused to begin a mural design until the pillars were done a trip to Hartcliffe B & Q was the only solution. Armed with 21 tester pots, a few brushes and a 5 year old, Anna dotted squares on pillars and left them for locals to complain- no-one did!

Ray Smith worked with the Landmark Practice to design the planters. Bristol Wood Recycling Project cut the scaffold planks and they were built and filled by committed local gardening volunteers. Bristol Zoo’s Wild Place project was hoping to provide us with native plants from their seedlings, but it hadn’t been a great winter for growing, so they raided Blaise estate nursery for the council rejects and delivered a striking variety of flora, including a very non-native banana plant. The nasturtiums are still flowering! 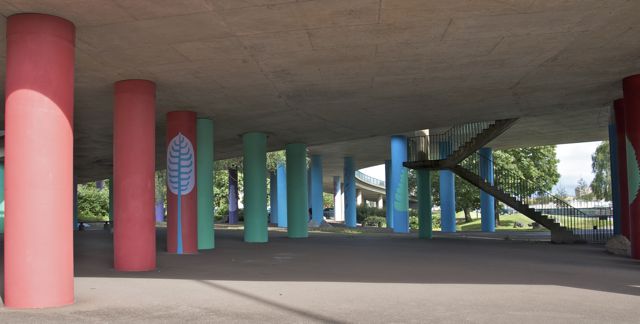 The pillar painting began in earnest at the last weekend of April with about 30 volunteers turning up. It took until mid August to paint them all, well as far as Anna’s arms and a 5 metre pole could reach- but at least Dave was now happy and produced some beautiful designs and created a magical ‘hidden forest’, with his team, in less than a week. And he braved the heights to reach up to the carriageways! 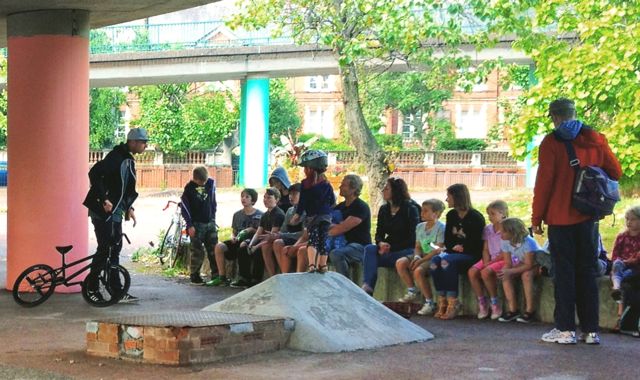 In July Sharing Communities, the Bristol 2015 Neighbourhood Arts project for our area, collaborated with Young Bristol for an event called Your Place to Play for young people to share ideas about what they wanted to do. 60 people came and joined in the conversations and activities which included BMX demos and tutoring from the amazing Matti Hemmings, a design workshop for a skate park from Canvas Spaces, a newly local business keen to get involved and beautiful floor painting from the DO15 team. People sharing thoughts and ideas for the future of the flyover continued at our Community Celebration Day in September with 30 more people joining us for a walk and drink at the Rose of Denmark. 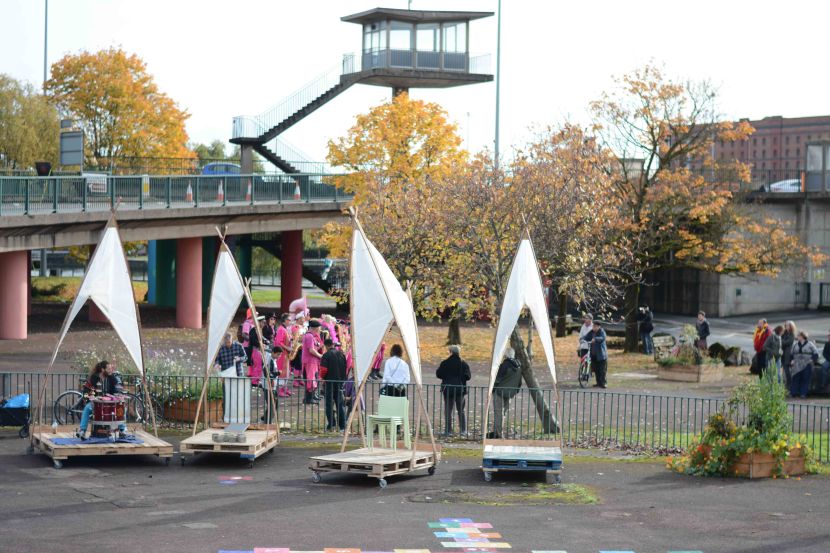 In October Sharing Communities worked with the Portway Sunday Park team and a group of UWE architecture MA students, Luke Copely-Wilkins, Luke Carnaby, Matthew Smith and Tom Sale, to create The Wayfarers, a moveable bandstand  which travelled from the Piazza to the sheer rock face just beyond the old funicular railway. The journey down the car-free Portway was led by the shocking pink Ambling Band and the recycled structures hosted musicians and local poet, Bob Walton. The acoustics across the Avon Gorge were wonderful! 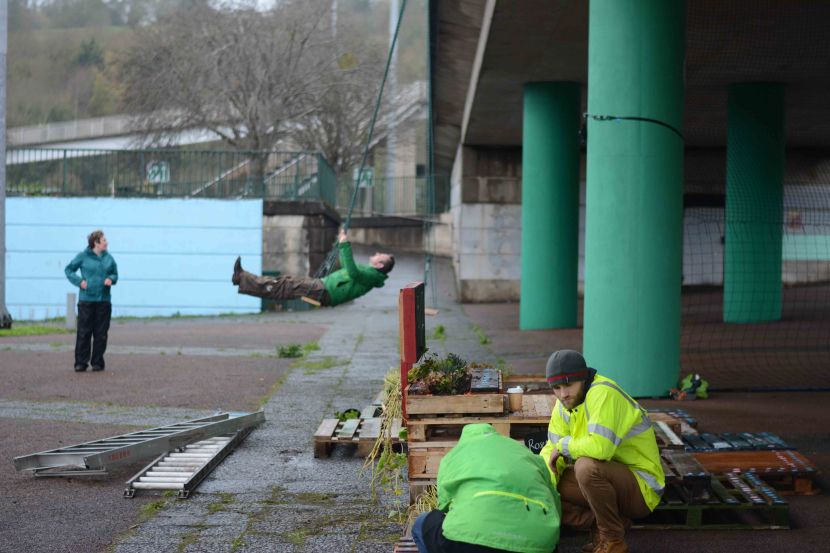 On the wettest windiest November day the UWE team organised a Cumberland Basin Bonanza, rigging up a temporary sports pitch, adding the pre-cut bench elements to the planters and making more from our growing stash of pallets. Riverside garden centre donated more plants and we discussed yet more ideas.

On December 16th Green Trees contractors tarmac’d our skatespot, designed by local skaters and drafted by Andrew Iles, completing all the works Hotwells & Cliftonwood Community Association had designed and funded. Without the enormous amount of volunteer hours from locals and Bristol-wide creatives it wouldn’t have been possible!

So, our colourful year has finished and we have new people involved and new ideas to explore for 2016.

Thanks to Trudy Feeney and her team at Bristol City Council Cleansing Dept & Mike Lawlor and Kurt James from BCC Neighbourhood Partnerships for all their support.